Hard to believe it has been 3 months since my last post. We survived ‘Harvey’ pretty much unscathed. Lots of anxious moments but no real damage. Unfortunately, many of our fellow Houstonians were not so lucky. Spent lots of time getting ready for the annual Houston Handweavers sale. Made more shibori indigo napkins and small lavendar sachets. Also prepared some wonderful cards and bookmarks using my eco print papers. added some wonderful silk eco print scarves to the inventory.

But now the International Quilt Festival has come and gone and this year I took 3 workshops (not sure if I’m prepared to do that again, driving back and forth each day during the worst traffic times takes its toll!).

Monday I always seem to start with a workshop by Glennis Dolce(Shibori Girl). This year we began with a couple of the basic stitches.

I sampled a stitch that I had not used in my work before (the overhand stitch – just above the shell). I like the feathery look. Will try to incorporate in a future project.

There were 2 very interesting things Glennis incorporated into the workshop this year. One was providing us with some very different fabrics to experiment with. The first photo below shows a silk organza which I used for the arashi technique. Due to the nature of organza I didn’t expect it to do well in a vat situation. It surprised me. Because of its stiffness the fabric scrunched very definitively and created extreme white spaces but it also dyed deeply. The second photo below is scrim. Once again I was surprised. Due to the extreme openness of the fabric I would have expected a much lighter effect. These 2 fabrics will be on my to do list for future experimentation.

The next thing I tried was a vintage linen napkin. The kind with the designs all over them. This one had some flowers in the border so I added a small butterfly. After dipping in the vat, I realized this napkin needed no enhancement. Just dyeing it in the indigo gave it new life. The fabric was amazing; it had been washed so many times it felt like heavy silk.

The second very interesting thing in the workshop was Glennis’s collection of vintage Japanese stencils. I played with several of those and decided that rather than the way I was transferring my patterns to fabric using a stencil would be more efficient and cleaner. I transferred a few designs onto some sample fabric to stitch and also made my own stencil. Have stencil making items on order and look forward to receiving them.

That pretty much wraps up my first workshop (and, of course, I look forward to next year with Glennis). Will be writing about the next two soon.

Finally, all the dyeing (for the items I had) is done for the ‘big project’. The picture shows them still wet and they took over 2 days to dry. Fortunately, I had a nice large plastic cover to protect them from my feathery visitors. Now they just need to be untied and let rest for several days before their first washing. I’ll try to remember to take a few pictures to share the results. They can then join the others, already done, for their final wash and pressing (groan – I know there are those who think ironing is a great way to get instant gratification but I’m not one of them). Anyway, I now look forward to working on my personal projects; shibori and indigo dyeing is included.

Since I mentioned working on my shibori stitch resist techniques, thought I would share some photos of a few of the patterns I have been doing. Most are very geometric. A few are pictorial. I have several more ideas. This seems to have taken over my life for the moment (it is rather additive).

Started testing various types of napkins as well as different stitches for the CHT (Contemporary Handweavers of Texas) conference dinner table napkins. The conference is not until next May but there is lots to do. The more we can get done ahead of time the better. 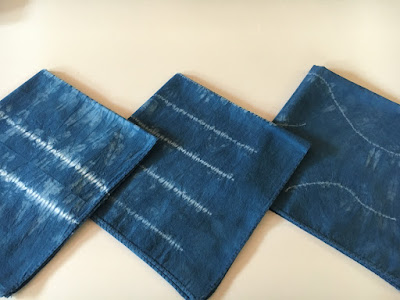 Tried to use some simple patterns as I didn’t know how much help there would be and what shibori experience there was in the group. 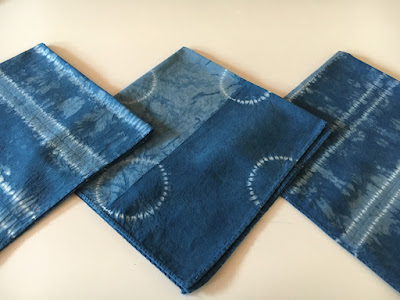 Think we’ll also be doing other natural dyes not just just indigo. That should make for some very colorful table settings. 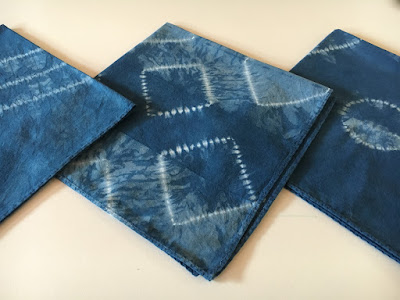 We’re still checking out napkin sources. I used Dharma for my test. The ones shown here are actually sold as men’s handkerchiefs but are very substantial and easy to work with. I also tried using the Dharma items sold as napkins but they were so thick I had a hard time stitching and even clamping was a problem. 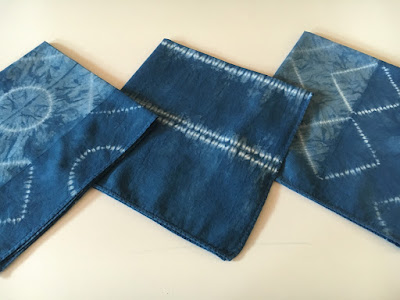 Hope decisions will be made soon. There are a lot of napkins to make. 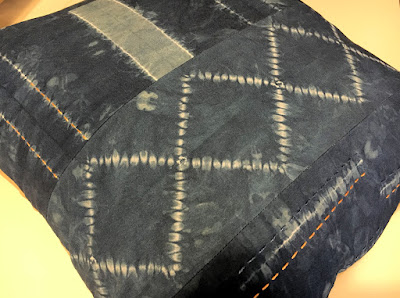 Have gotten my pillows made for the annual Handweaver’s Sale. The pillow above had little space for embroidery but I did get a bit on it. Didn’t think about the addition of stitching when I sewed the strips together. Was more concerned about getting the most interesting strips maximum exposure. 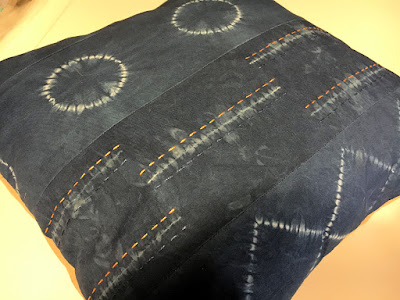 This pillow had a bit more ‘in front’ space for a bit of embroidery. 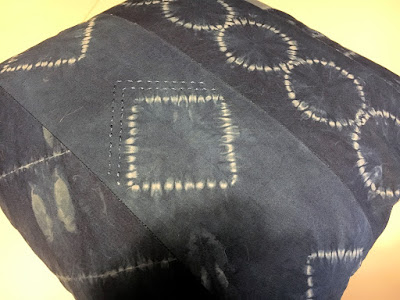 The embroidery on this pillow is a bit more subtle. This was the only pillow with shibori designs on both the front and back so embellishment was kept to a minimum. 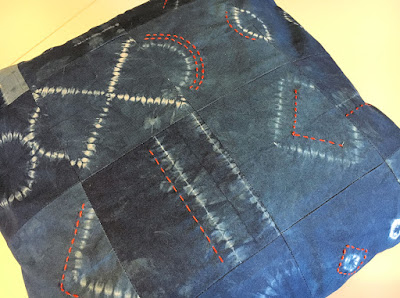 This is the patchwork pillow and despite all the patterning I decided to add a lot of stitching in a lovely dark orange. This pillow is not going to the sale and is very happily sitting on my couch.

I’m now adding more shibori stitched fabric to an increasingly large pile to get ready for another indigo dye session. Stay tuned for those results.

Also trying to get a little eco printing done. The results so far have been less than spectacular. Think I’ll just concentrate on the indigo for the moment and when that is off my mind I’ll focus on some eco printing. 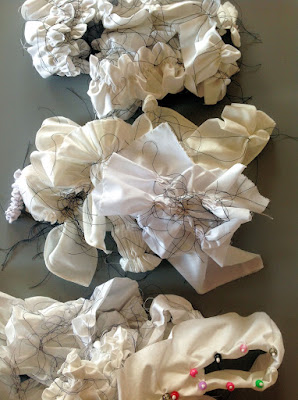 Started my resist stitching last fall. Took my time and ended up with a small basket full of fabric. 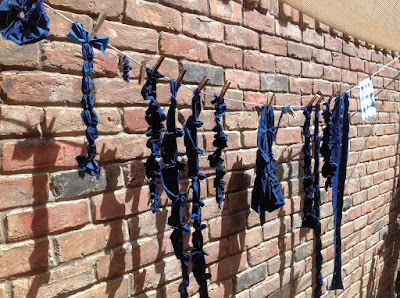 Finally made up my indigo vat (was waiting for the evenings to be not as cool as they had been) and dipped my basket of fabric. Didn’t wait to iron my pieces before I took the photos below (although they are washed). 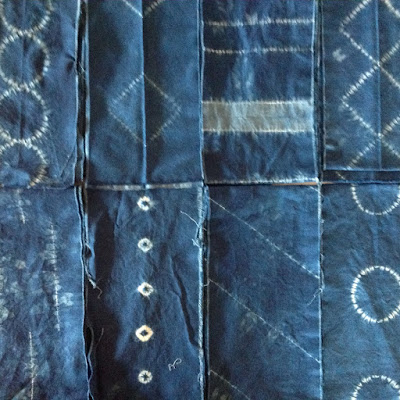 Loved these. Tried several stitch options. They are destined to grow up into a couple of pillow covers. 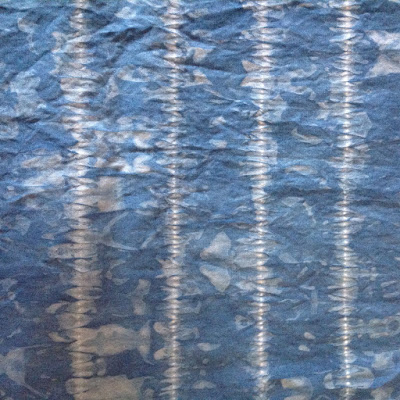 Another interesting piece. Maybe this design on a couple of larger pieces. Would make a lovely top. 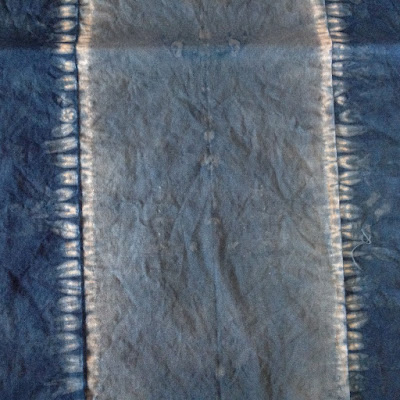 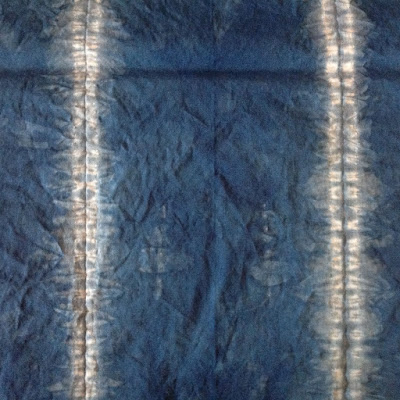 Can’t decide which side I like better. Maybe good for a pillow cover. Each design on a different side. 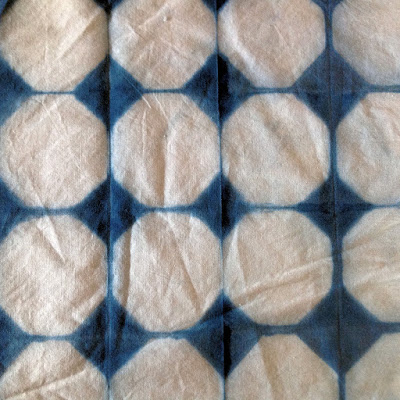 Only did one clamped fabric. Now that all my stitched pieces have been dyed I’ll clamp some pieces for my next dye day. 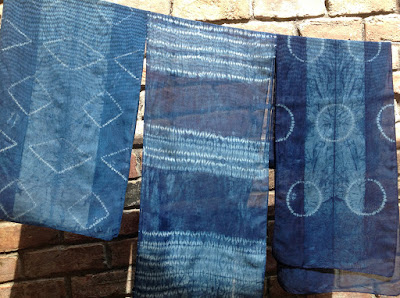 Enjoying the results from ‘stitched’ resist shibori. Have tried a few ‘shape’ resists and don’t care for them as much. There are so many stitch patterns that can be created in addition to the numerous ones that currently exist. Could be a lifelong undertaking. After sketching out the pattern, the actual stitching is a great evening project

I decided this year I would only take one workshop at the Quilt Festival and did I pick the right one! It was titled Indigo Shibori Style and the instructors were Glennis Dolce (Shibori Girl) and Katrina Walker (seamstress extraordinary).

Pictured on top is the front of the vest I have not as yet completed. I still need to add the side inserts and finish the edges. The front panels of the vest are all silk. The back panels, as seen in the picture above and below, are cotton. Each of the panel sets were a different kind of silk or cotton. The panels were all prepared in Glennis’ session. The vest construction was done in Katrina’s session. I am still not overly comfortable sewing a garment but so far it is looking wearable.

Workshop is highly recommended and I’ll look for these two ladies again next year. Now I can concentrate on finding supplies and looking at fantastic quilts.