Last year I took a workshop using the Schacht Cricket rigid heddle loom. I already owned a Harrisville Easy Weaver but the Cricket looked more ‘grown up’ so I bought one. To make it seem even more ‘grown up’, I bought the 15 incher! Well as I spend most of my time doing eco printing, prepping for indigo shibori and, of course, kumihimo, my new loom sits quietly on the shelf. One of the problems I found (which contributed to discouraging me) was that propping the loom on the edge of a table, which works well for the smaller loom, does not work so well with the larger one. My heddle kept flopping forward when I placed it into any of its positions. That being said, I did find there is a stand available for the loom. This would mean I could sit under it, leaving it relatively level so the heddle would stay in place. I did have some nice sales last year of my various items so I am going to treat myself to a stand. Hopefully, this fix will be as encouraging as I hope.

Before I put the loom on the shelf, however, I did warp it for a project. My workshop leader may not approve of my warp choice but it does look so nice with the handspun I’m going to use for the weft. 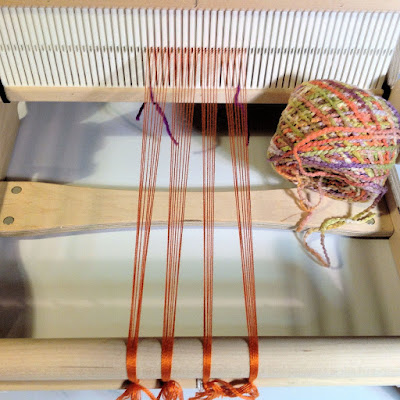 To further inspire me to weave, I found a new book on rigid heddle looms. The title is Inventive Weaving on a Little Loom. The author, Syne Mitchell of WeaveZine fame, reviews the different portable rigid heddle looms available and goes from start to finish on how to warp, weave and finish pieces as well as doing some troubleshooting. She also has several projects using different weave structures. The book is packed full of great stuff. 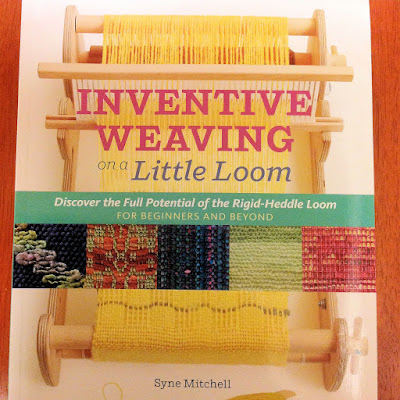 This is a well done book.

What a beautiful, bright day. A new year has started and January is always a very busy month. There are birthdays, anniversaries, the business of clearing out last year’s files and setting up new ones and, of course, can’t forget planning new projects. I have eco printed some new scarves but they are waiting to be pressed so they can have their pictures taken.

At the Houston Center for Contemporary Craft (HCCC), the first Hands On activity of the year was making paper flags. I didn’t have a chance to make them while I was there (we had lots of visitors) but I did bring home a couple of patterns and some paper and finished my project there. I think they are great and couldn’t wait to hang them up. 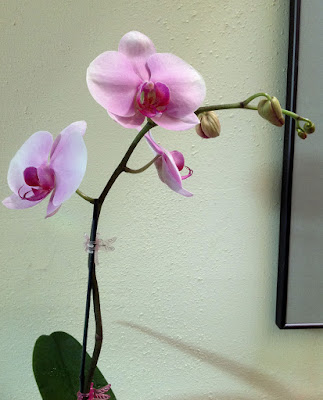 If I’m very lucky, one of my ‘grocery store’ orchids will bloom more than once. This one is in its third or fourth year and it has bloomed each year. There are still many more buds to open so these lovely flowers will be with me for a while.